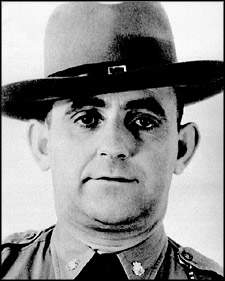 Sergeant Charles F. Hill of West Hartford was struck and killed by a hit-and-run motorist while he was directing traffic in North Canaan on November 6, 1941. Sgt. Hill was born in Pawtucket, Rhode Island in 1904 and joined the State Police in 1929.  He served in Groton, Stafford Springs, and Canaan and became a sergeant in 1939. Sgt. Hill “was very well known throughout the State and was popular with the public and with members of the State Police Department.” A fitting tribute to any police officer.