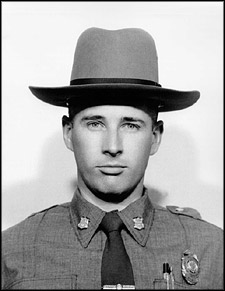 Trooper James W. Lambert, age 26, was struck by a drunk driver in Bethel on October 29, 1960. His career had spanned only seven months. He entered the training school in March 1960 and was assigned to field training stints at Troops L, I and A between April and June.

His life career was cut short, but his brief presence with the Department left its mark. The Trooper James W. Lambert Award is given annually to a young adult under 21 years of age that demonstrates exceptional courage in the saving of the life of another during the year.