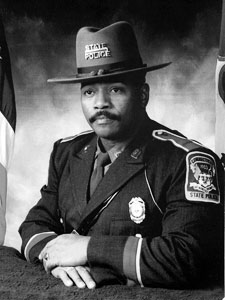 On Thursday, September 02, 2010 shortly after 4 p.m., TFC Kenneth R. Hall of the CSP Traffic Services Unit, while completing enforcement action paperwork in his police cruiser off the shoulder of I-91 northbound between exits 48 and 49 in the town of Enfield, CT, was struck from behind by a pickup truck travelling at a high rate of speed. Hall was rushed to Baystate Medical Center in Springfield, where he later died. Damage to the police cruiser was “beyond belief.”

TFC Hall entered the Academy in April 1988 and was first assigned to Troop L. He later served at Troop D, Troop E and finally at the CSP Traffic Unit since 1993, where he specialized in commercial enforcement.