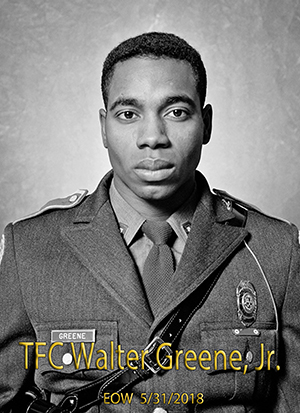 Trooper First Class Walter D. Greene, Jr. died from illnesses he contracted while inhaling toxic materials as he participated in the rescue and recovery efforts at the World Trade Center site following the terrorist attacks on September 11, 2001. Trooper Greene and his canine, along with other members of the Connecticut State Police's search and rescue team, had responded to the World Trade Center immediately following the attacks to search for possible survivors.

Trooper Greene was a U.S. Marine Corps veteran and had served with the Connecticut State Police for 28 years.